In today’s world, odds are you know at least a few words in a language other than English, whether you picked up a few things from Dora the Explorer or you’re fluently bilingual—maybe English isn’t even your first language.

Did you know the Madison Library District owns a variety of materials in foreign languages? From classic and contemporary literature to films, at least 20 languages are represented, including Albanian, Arabic, Chinese, Czech, Danish, French, German, Hebrew, Hindi, Italian, Japanese, Korean, Norwegian, Polish, Portuguese, Russian, Spanish, Swedish, Tamil, and Taiwanese. We have both translations of popular works, like the Harry Potter series and What to Expect When You’re Expecting, and classics in their original languages, like The Adventures of Pinocchio and Don Quixote.

Until now, these books have been incorporated into our junior, young adult, and general non-fiction collections. With three different places to look for a book in a foreign language, it was hard to tell what we had to offer. Many people may not have realized we have foreign language books at all.

In an effort to make it easier for our patrons to search and browse all the foreign language books we have available, the books are being relabeled and will be shelved together in one place. In recent weeks, visitors to the children’s section may have noticed that the junior audiobooks and DVDs have migrated to the shelves between the Community Room and the Activity Room. Over the next few weeks, our foreign language collection will be moving into the vacated space on the north wall next to the junior non-fiction. The move will happen in batches as we finish recataloging. The books will be organized by language first, then subdivided into fiction and non-fiction and by age group, mirroring the filing of books in our other collections.

To browse all of our offerings in a given language in our catalog, do a subject search using the phrasing “Spanish language materials” or “German language materials,” inserting the language of your choice. This will display all books and movies available in that language. Our newest materials can be found under the New Titles tab in the online catalog.

As we build up this special collection, we would like to hear from our patrons which languages they are most interested in having us obtain or expand. Visit our Facebook page at http://www.facebook.com/Madisonlib.org to vote for or to suggest a language, or come into the library to cast your ballot. 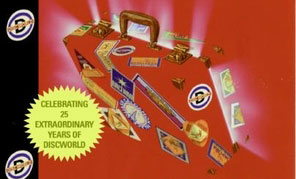 “The Color of Magic” by Terry Pratchett

“The Color of Magic” by Terry Pratchett

When Terry Pratchett passed away earlier this year, I decided it was time to explore his Discworld universe. It turns out, it was way past time.

Brief backstory: You have a flat, round world sitting on the backs of four enormous elephants who are in turn standing on the back of a mindbogglingly massive sea turtle slowing flippering its way through space. On this world (the Discworld), there is a preternaturally inept wizard named Rincewind who, much to his chagrin, becomes tourguide to the world’s first tourist, a strange being named Twoflower who is completely lacking in any instinct for self-preservation. Then, you know, there’s a hulking barbarian, dragons, tree-nymphs, sentient luggage, and Death himself.

The book is organized into four vignettes. They follow each other sequentially, but are written in such a way that they almost read more like short stories than chapters.

I truly enjoyed this book. The tone is absurd and satirical, taking all the tropes of ‘80s high fantasy and cranking them up to eleven. It was like reading Monty Python or witnessing the world’s silliest game of D&D. If such geeky references are already putting you off, this is not the book for you. But if they made you chuckle, or if you just said to yourself, “The world’s silliest game of D&D? I don’t know. That’s a pretty stiff competition,” odds are either you’re already a Discworld fan or you desperately need to be.

This is the first novel published in the Discworld series, but I found out a while after I read it that there is some debate among fans of Pratchett’s work as to whether this title or Equal Rites, the third published, should be read first. They each launch a different subseries, so there is no canonical harm in reading them in any old order. Having now read both, I can tell you that Equal Rites is in some ways more accessible. Equal Rites is cheekily humorous without being as completely over-the-top as The Color of Magic, and the plot is a continuous progression from beginning to end rather than episodic jumps. If you want to ease yourself into Pratchett’s world, go with Equal Rites. As for me, I’m actually really glad I started with The Color of Magic.

If you like satire, humor, and fantasy, you may love this book.