We have a wide variety of materials for children from birth to age 8, including books, movies, magazines and more.

Board Books  – can be found in the northwest corner of the library.  These sturdy books have cardboard pages to resist tearing.  They are primarily for babies ages 0 – 2.  Look for the label on the spine that says “BB.”

“E” on the spine label means “Easy” or “Early” but really designates the PICTURE BOOKS collection here at the Madison Library District.  These can be found on the three rows opposite the Children’s Service Desk near the “Community Room” inside entrance.  Most are about thirty pages in length and the reading level varies from very simple to sixth grade.  Among them can be found Lift-the-Flap books (use the subject headings “toy and movable books” and “lift-the-flap”), and a very few simple pop-up books.  Some of them don’t have any words at all.  These can be found using the subject search “stories without words”. The primary audience is pre-school age children through grade three, but can be enjoyed by persons of any age.

“EBCD” on the spine label means these are Easy or Early Books which also include a CD. The CD either narrates the book’s text or dramatizes the book with narration and music.  These can be found opposite the JE books.

Emergent Readers are found on the north wall in the children’s wing in small boxes and baskets on the shelves holding the “JE” books.  Look for the spine label to say “EM.”

“JE” stands for Junior Easy or Junior Early. These are found on the north wall in the children’s wing.  Look for the blue sign which hangs above them. The reading level varies from pre-kindergarten to second grade.  They are shelved in order by author.  Books about popular media characters are often written by a staff of writers so we try to simplify finding these by putting them under the character’s name or the series name.  Examples include “Barbie”, “D.C.” comics characters”,”Disney”, “Dora”, “Lego”, “Marvel” comics characters, “Scooby-Doo”, and “Star Wars”.  The first and second grade level books are sometimes referred to as Early Chapter Books and are a bridge to the Junior Fiction books.

The Junior or Juvenile Fiction (spine label reads “JF”) are found on the two rows just east of the Children’s Service Desk.  The target age group for these chapter book stories is ages six through nine.  Most of the books are just under 200 pages and many are illustrated.  Most of these are shelved in order by the author’s last name.  If a series of books has been written by multiple authors the books are shelved by series title.  Examples of this exception include “American Girl” books, “Classic Starts” books, “Flat Stanley Worldwide Adventures”, “Geronimo Stilton” books, and “Great Illustrated Classics”.  Series are shelved by series order instead of title order.  No attempt is made to indicate “AR” books as nearly every book in the collection has an associated “Accelerated Reader” test available.  Each school has a unique collection of tests, making it best to refer back to the school any AR questions.  The person at the Children’s Service Desk can make an internet search to find out the reading level, point level, and test number of titles we own.

Junior Graphic novels are found on the wall just before the Community Room inside entrance.  Look for the yellow sign which hangs over them. The term “graphic” is a book industry term referring to comic format books. Their spine labels will read “JG.”

A spine label reading “JAUDCD” means this is a Junior or Juvenile Audio book on CD. These are found on the north wall just opposite the Circulation (Check-out) Desk.  Look for the gray sign hanging over them and are on the far left on the top three rows. These are recorded readings of some of the books found in the Junior Fiction collection.

Junior Movies on DVD and VHS

Spine labels reading “JDVD” and “JVID” indicate Junior or Juvenile DVD and videocassette tapes.  They are both found on the north wall just opposite the Circulation (Check-out) Desk. Look on the bottom rows for these.  The informational films are shelved by Dewey Decimal topic categories.  The story films are shelved by title or by popular-media-character.   These are films targeted for children which have never been shown in first-run theaters. 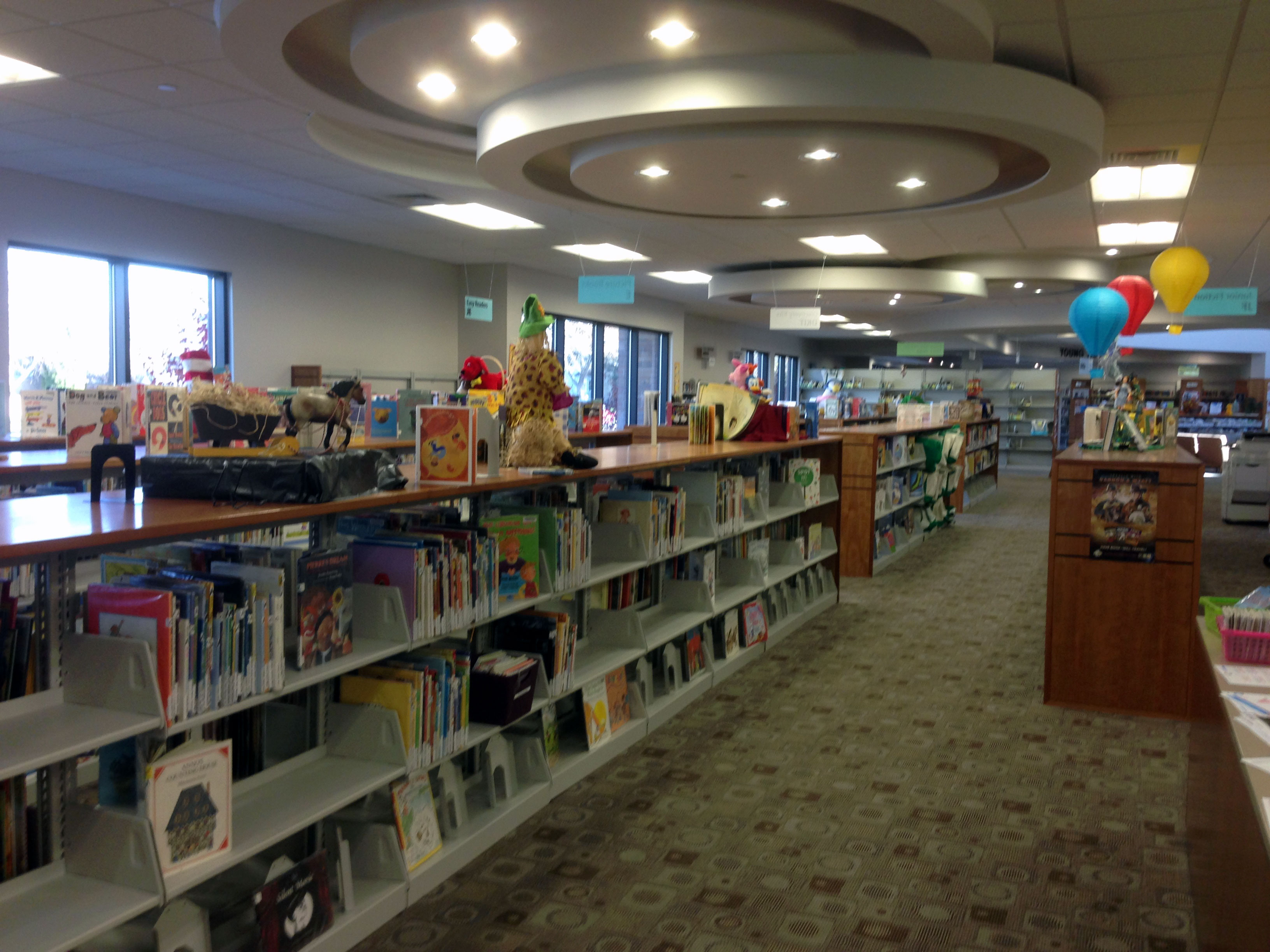