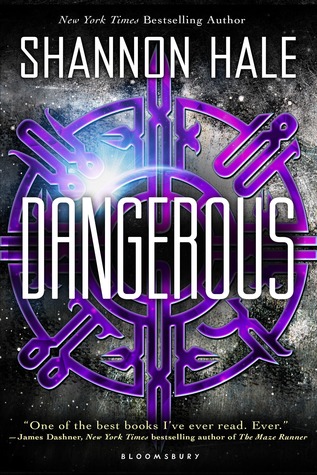 Maisie Danger Brown just wanted to get away from home for a bit, see something new. She never intended to fall in love. And she never imagined stumbling into a frightening plot that kills her friends and just might kill her, too. A plot that is already changing life on Earth as we know it. There’s no going back. She is the only thing standing between danger and annihilation.

Bekka rated it ★★★★ and said, “Thanks to Netgalley.com and Bloomsbury USA Childrens Books for early access to this title. I really enjoyed this read! It was suspenseful and interesting pretty much throughout. I think the characters were quite well done, and I love Maisie Danger Brown (her actual name)! The parents were good, and the villains were appropriately evil. The romance was great, and I liked the triangle which had me guessing for a while. This was a great, fast moving plot, and I would Recommend this to pretty much anyone who enjoys a good sci-fi adventure story with a great, strong female lead. A nice departure for Hale, who is so great with the re-told fairy tales! This is a new area for her to excel in.”

Miranda rated it ★★★★★ and said, “Thanks to Netgalley.com and Bloomsbury USA Children’s Books for allowing me access to this. 4.5 stars. I went into this completely blind. I had no idea what to expect. This is NOTHING like her other books, and yet the writing and story are still just as amazing. I thought the little jokes the father told were pretty funny and helped show the positive relationship she had with her parents. I could have done with a little less of the teenager-y angst, “he loves me, he hates me” stuff, but it mostly came together for me and worked in the end. And it was nice to have a love triangle appear and get squashed just as quickly. It gets really old when they drag out, and sometimes friends are just never more than friends. Overall, I think fans of Hale’s other works will enjoy this one. I would also recommend it for fans of Pittacus Lore as it has a similar feel.”