Triumph: The Untold Story of Jesse Owens and Hitler's Olympics 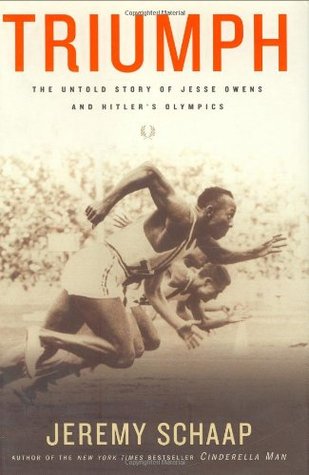 From the ESPN national correspondent and author of the New York Times bestseller Cinderella Man comes the remarkable behind-the-scenes story of a defining moment in sports and world history.

In 1936, against a backdrop of swastikas flying and of storm troopers goose-stepping, an African-American son of sharecroppers won a staggering four Olympic gold medals and single-handedly crushed Hitler’s myth of Aryan supremacy. The story of Jesse Owens at the 1936 games is that of a high-profile athlete giving a performance that transcends sports. But it is also the intimate and complex tale of the courage of one remarkable man.

Drawing on unprecedented access to the Owens family, previously unpublished interviews, and exhaustive archival research, Jeremy Schaap transports us to Nazi Germany to weave this dramatic tale. From the start, American participation in the 1936 games was controversial. A boycott was afoot, based on reports of Nazi hostility to Jews, but was thwarted by the president of the American Olympic Committee, who dismissed the actions of the Third Reich as irrelevant. At the games themselves the subplots and intrigue continued: Owens was befriended by a German rival, broad jumper Luz Long, who, legend has it, helped Owens win the gold medal at his own expense. Two Jewish sprinters were denied the chance to compete for the United States at the last possible moment, most likely out of misguided deference to the Nazi hosts. And a myth was born that Hitler had snubbed Owens by failing to congratulate him.

With his trademark incisive reporting and rich storytelling gifts, Schaap reveals what really transpired over those tense, exhilarating few weeks some seventy years ago. In the end, Triumph is a triumph—a page-turning narrative that illuminates what happens when sports and the geopolitics collide on a world stage.