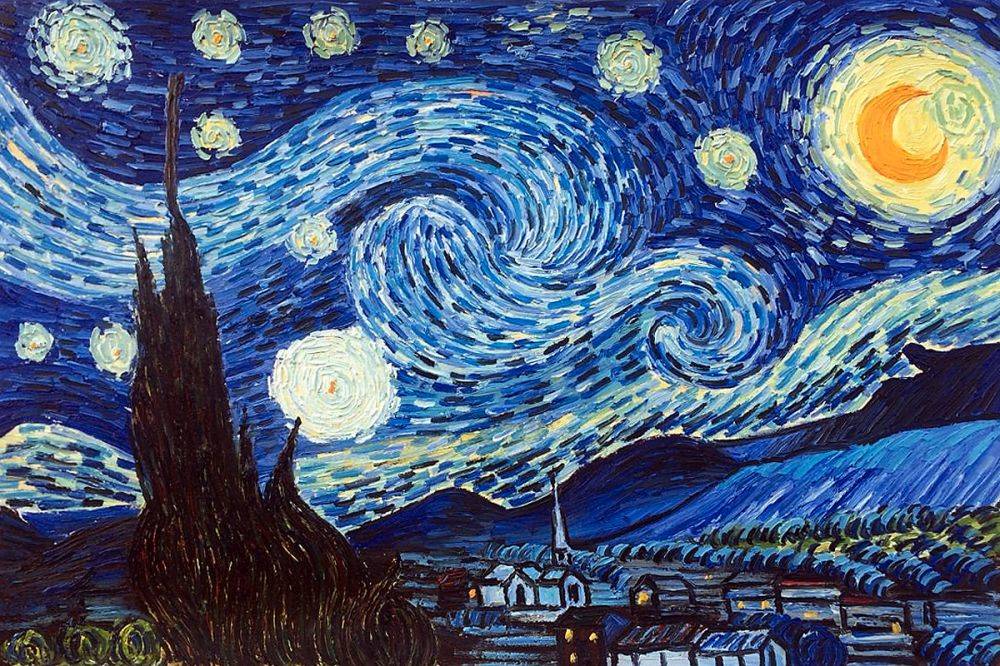 Winners of our 2017 Teen Writers’ Contest!

Congratulations to the top three winners of our Teen Writer’s contest!

The stories were judged on originality, grammar & spelling, use of the prompt “Starry Night” from the painting by Vincent Van Gogh, a clever beginning or “hook”, and overall enjoyment.

A big thanks to all the teens who participated!

The stories were clever and a true joy to read.

Keep an eye out for our next contest and keep writing!

"The Story of the Stars" by Naiya Herzoff

The horse caused Theodorus to bump slightly in the saddle as he rode down the rough dirt road. The sun glowed above, bright and glorious, and the lush green trees gave the fragrance of fresh nature. The journey was a long one, merely a lone man riding into the unknown. He rode on, occasionally giving his trusty horse an approving pat. The palomino whinnied gladly, and he spoke to it.

“Hey Marron, don’t worry. I think I see something ahead.” And indeed he did. As they trotted up a hill, there was a slight view of what looked like a small town. They rode over, and went down a straight path leading to the distant town. After a while, they reached the beautiful community and rode inside. The sun shone over the brick and wood walls of the houses and shops. People were walking in the streets, all looking pleasant and lively. Many said hello to him, and one man even offered to buy him something.

“What can I get you for free today?” he asked. “Bread? A new coat? Anything, for I put it upon myself to care for all the newcomers in this town.” Theodorus politely refused the man’s gift, for he felt guilty that the man’s money would be wasted on him.

He rode through the town, intending to just pass through and leave again, but soon realized he was becoming very weary. He knocked on the door of a pleasantly beautiful looking red brick home, hoping for a place to stay for the night. An old man with green eyes that sparkled and a small scruffy gray beard opened the carved wooden door.

“Excuse me for interrupting,” Theodorus said nervously. “But I was wondering if maybe I could stay one night at your home? My journey has been tiring, and I have no money for a room.” The old man smiled, and his eyes shined. He beckoned Theodorus into the home, opening the door wide.

“Come in, come in. My name is Giovanni, now let me show you inside.” Theodorus quickly tied up his horse on the front porch and stepped inside. The house was warmed by a gray stone fireplace, the flames crackling and popping, giving the room a homey glow. It had only a few padded chairs clustered in the corner and a small wooden table. A doorway looked into a small, humble kitchen, with many lit candles gathered on the counter. Giovanni led him to a short hallway and took Theodorus through one of the red wooden doors.

“This shall be your room,” Giovanni mentioned. It was a small but homey room, with a low bed and a square oak desk. The window displayed a slowly descending sun. Bright colors were painted across it, creating a beautiful canvas. Giovanni smiled warmly and strode from the room. Theodorus paced around for a minute before sitting at the desk, staring absentmindedly at the candle, watching the wax slowly drip down.

He sat up suddenly, quickly becoming aware of how dark the room had become. In his daydreaming, the candle had been reduced to a mere stub. The window now displayed a magnificent starry night sky. Theodorus left the room to find the kind old man cooking a stew over the fire.

“Finally,” he remarked. “I was starting to worry you had slipped away and left.” He carefully spooned some warm stew into a bowl and handed it to Theodorus.

“Eat up! Sorry dinner is so late.” They sat down together at the small dinner table, and Theodorus was very grateful of the man’s generosity.  Giovanni started up a conversation as they ate.

“So, tell me about yourself. Why are you here? Where are you traveling?” Theodorus told him of his travels across the country, riding on rough dirt roads to find a city to live in, any city he came across. He had been kicked out of his previous home because of tax increase, and now he needed a place to work at to purchase a house.

“My luck for work will be better in the city,” he mentioned to Giovanni. “I have no true destination, only the road in front of me.” After dinner was finished, Giovanni took him out of the house and led him to a small hill overlooking the town. They lay down on the grass by a large tree and looked up at the stars in silence. Theodorus took the peaceful time to think about everything as he silently praised the splendor of the stars. They were the brightest he had ever seen, and he watched them with delighted wonder. He chose not to ask the old man his question about the stars, for it seemed absurd and childish. They later walked back down the hill in pondering silence.

Theodorus slept steadily, and he awoke feeling pleasant and relaxed. He sat up in the bed, and the memories flooded back. His bright morning spirit soon dimmed as he realized that he had to leave this lovely home and say goodbye to Giovanni. He quickly got ready, slung his pack over his shoulder, and walked through the main room of the home to the front door. As he reached for the knob, Giovanni walked out of the kitchen and exclaimed, “Are you leaving already? At least stay for breakfast, my dear man.”

Theodorus unwillingly walked away from the door and took a seat at the small table.

“All right, all right. I shall stay for breakfast, but that only. I must leave, for I do not wish to intrude on your life any longer, and the work I need is most likely elsewhere.” The old man’s sparkling eyes seemed to dim.

“I wish you could stay in my home a while longer so we could become better acquainted. I’m sure there is work for you in this town.” they both sat down and enjoyed bread as they talked. Giovanni told of the blacksmith’s apprentice, and how he had passed away of disease.

“The blacksmith needs a new apprentice, and you may be up for the job. Why don’t we go meet him?” Theodorus reluctantly agreed to stay a week longer and meet the blacksmith in three days’ time.

The three days came and went with many good meals, meeting others in the town, and star gazing. The two soon became good friends, and went together to meet the blacksmith. As they walked in the shop, they saw a large dark haired man with a scruffy beard holding a metal rod in a fireplace.

“Hello, can I help you with anything?” He smiled over at them in the friendly way that all the townsfolk seemed to greet people. He carried the pole over to a workbench and hit it hard with a hammer.

“I was wondering about the apprentice job,” Theodorus hollered over the sound of hammering. “Is the spot available?”

The blacksmith stopped hammering and looked at him. “Sure, what’s your name?”

“Are you friends with Giovanni here?”

“Of course, I know everyone in this town.” He began hammering again. He yelled, “I’m a bit busy at the moment. Meet me in four days at this shop late in the day. Farewell!”

The next day came and went just as the ones before it. Theodorus and Giovanni made new friends, cooked, learned, and watched the stars. As they were star gazing, Theodorus finally mustered the courage to ask Giovanni about them. “Why are the stars above this town so splendid and bright?”

Giovanni looked at him in a curious way and said, “I was wondering when you we going to ask that. You see, as a community, we believe that when a person dies, a new star appears in the sky above the place they most called home. The kinder and better the life that person had, the brighter the star is.” He looked up and his eyes twinkled.

“Make it your goal to one day to be one of the brightest and most splendid stars shining in the sky.” And without another word, he walked down the hill back to his house.

Theodorus decided to stay on the hill by the tree and think for a while. He thought of life, of hope, of Giovanni. He lay for hours, looking without stopping. When he finally got up to go back, the sun was rising, declaring morning. He set down the hill striding to the house he knew well now, but found a surprise.

There was a man with an officer hat and coat standing at the door. Two other men were carrying out a large wooden board with something on it covered in a white sheet. Suddenly curious, he asked the officer, “What’s going on here? Where is Giovanni?”

The officer told him with a grim face, “I am sorry, but your friend Giovanni passed away last night. Marco Ricci had stopped to drop off a gift and found his body in his bed, passed from old age.”

The wave hit, pulsing and burning inside Theodorus. It was too much, and he simply turned around, left the officer, and ran. He did not know where, but his pain was guiding him. It pulsed, pushing him on and on along the grass of a distant valley. He didn’t care if he got lost, or if he was tired. He didn’t care, he just ran. He tried to run from the pain, but he knew he could never escape it. Everything was wrong, life was a lie, existence was just an evil and painful mockery of human beings. Nothing, nothing could hurt as much as he hurt. Nothing. Finally stopping his run, he simply sank to his knees and cried.

After hours of painful solitude, he eventually made his way back to the town. He planned to untie his horse, grab his pack, and leave. He never wanted to come back; he never wanted to feel this pain again. He walked up to the house, and it hurt to see it. The door was slightly ajar, and he could see people inside. “Leave his spirit alone, you fools!” he hollered. They all looked up from their work of inspecting the house. A woman in an officer coat came and put her arm around him.

‘I am so sorry. This never should have happened. He was the best man this town has ever known, and his loss is the worst of them also. We found his will, and he left the house to you, Theodorus. You’re one of us now.”

He glared at her. “I don’t deserve to live here. I’ll never be half the man he was. It’s not mine. You take it. Anybody. Take it! I can’t live with the pain!” He turned away as the officers left the house and wished him good luck, trying to comfort him. He didn’t care. He left again, this time going to the hill to watch the sunset.

Theodorus lay by the same tree as all the times before. Like all the times when he had Giovanni, when life felt like it had a purpose. He watched as the orange sun sank below the horizon of the town, and the same magnificent stars appeared in the sky. The sun came up, and he noticed something. There was a new star in the sky, shining brighter than the rest, twinkling with goodness. At that moment, everything became right as he walked to his new home.