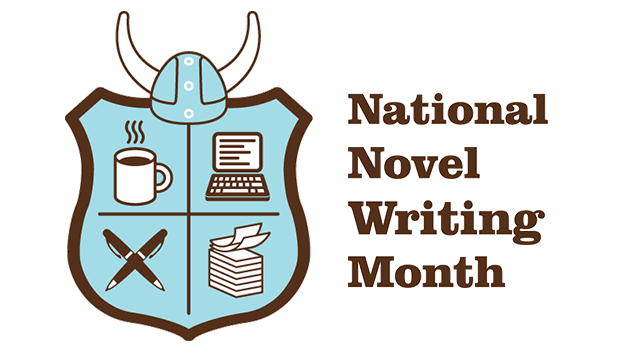 I’ll soon begin another round of NaNoWriMo, known to non-Wrimos as National Novel Writing Month. Each fall the challenge is thrown down and fool-hardy people accept it not knowing what they’re getting themselves into. The truly insane do it again, and again, and again.

It all started when a group of friends in San Francisco dared one another to write a novel of at least 50,000 words in one month. Most of them bombed out early on in the ordeal, but a handful actually did it. Granted, they were horrible novels, but then, that’s what first drafts are for. The next year, friends of the friends wanted to try it as well, and from there . . . Well, last November there were 325,000 lunatics worldwide typing and/or scribbling away.

The staggering majority of these novelists will never be published. The authors will never make a dime from their hard work. They will have spent thirty days staying up late, getting up early, neglecting family and friends, letting the dishes and newspapers stack up, going without exercise, neglecting their hygiene, and living on food not fit for a warthog. They’ll also tear their hair, spurt expletives, and wonder why on earth they signed up for this. It’s crazy.

When I finished 26 Ways to Die in a Cave, everyone asked if I had a publisher, an agent, etc. I didn’t. When I’d I typed “The End” on  The Baker Ladies Terrorist Society, people remembered the previous year and asked what ever happened to the first novel. – A few revisions and not much else. I sense the general attitude is, if you’re not going to make a buck from this, why put yourself through it?

The answer hit me during a recital I was giving with some friends. No one came up after the performance and asked if I’d signed a recording contract. Now, that isn’t to say that I wouldn’t happily accept a deal from Sony; but if that never happens, I don’t consider the hours of practice a waste. My musical pursuits have helped me express myself. They’ve allowed me to grow in areas that would be basically dead without them. They’ve broadened my understanding. They’ve heightened my senses. They’ve enriched my life.

My first experience with NaNoWriMo set off little sparklers inside my brain. There were connections being made that were entirely new and exciting. I felt more enthused about life than at any time in recent memory. In spite of the lack of sleep, the bad food, and a long list of other deplorable elements, I felt wholly alive. It was amazing. It broadened my understanding. It heightened my senses. It enriched my life.

Now I’m not about to say that everyone should be writing 50,000 every November, (although, you might want to give it a shot) but I do think that trying something insane periodically is almost required for optimal brain health. If we don’t push our limits, our limits shrink. We become capable of less and less. It’s the use it or lose it philosophy. It works with muscles. It works with talents. It works with brain capacity.

Find an area where your brain isn’t being used. Maybe it’s writing. Maybe it’s belly-dancing. Maybe it’s building a canoe. Whatever the new unknown area is, don’t dabble. Immerse yourself and ignite some fireworks in your brain. Make some connections. Heighten some senses. Enrich your life.

If you do decide that writing a novel will light your torch, the Madison Library District has tools that might help. Consider titles such as: On Writing; If You Can Talk, You Can Write; No Plot, No Problem; Dancing on the Head of a Pin; Blood on the Floor, The Courage to Write; or Book in a Month. In addition to advice in printed form, we’ll be holding write-ins in our community room on Tuesday, November 3, and Tuesday, November 10, from 6 -8 P.M. where you can focus on your writing without home distractions and rub shoulders with other WriMos. Many other NaNoWriMo events will be take place around town conducted by Rexburg’s official Municipal Liaisons. Find out more about them and sign up to become an official WriMo at www.nanowrimo.org.

Another way we’ll help with your writing is a presentation on Thursday, November 5, at 7 P.M. in our community room. Scientist and author Lee Falin. Mr. Falin was also a presenter at our recent teen writer’s symposium where his program on genetics in fantasy and science fiction was enthusiastically received. This time his topic will be:

How to Carry Out your Own Research: Do you have a science idea for a story but are unsure how sciency it really is? In this presentation you’ll learn how to go beyond Wikipedia and other questionable websites in order to see what real scientists are saying about a given topic. Learn how to cut through the scientific gobbledygook scientists use to write their papers so that you can understand just what they are saying, and (often more importantly) what they aren’t saying.

Whatever your writing project, there’s something at the library to help. If belly-dancing or canoe building are more what you had in mind, the library is a great place to get started with those as well. Visit us at 73 North Center Street in downtown Rexburg. Our regular hours are Monday-Thursday 9-8; Friday 10-6; and Saturday 10-4. You can also reach us at 356-3461, or visit our website at www.madisonlib.org.